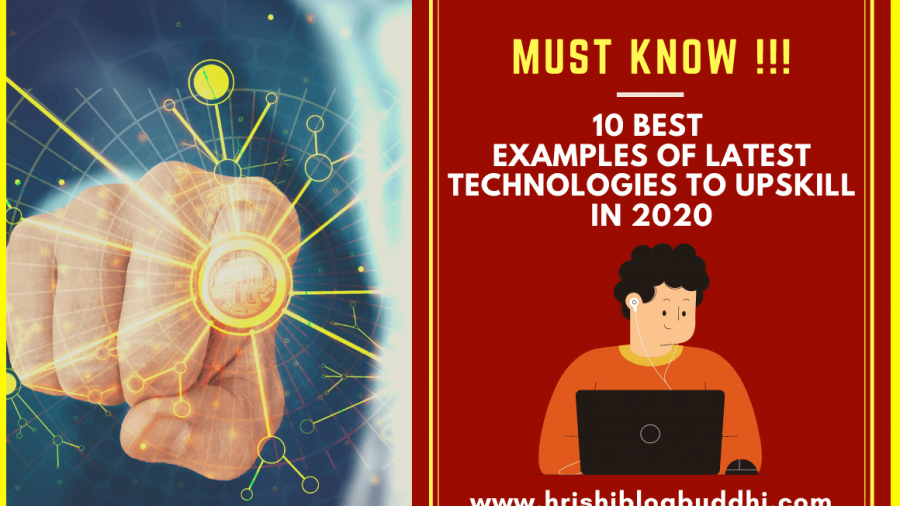 Up-skilling yourself in any of the newest technologies and adapting to them in today’s competitive world is highly vital especially when it’s constantly evolving quickly, and giving rise to new ways for innovations as well as job opportunities in the information technology industry. If you’re looking to pursue or switch fields to get into sectors connected to tech (IT), then you’ve arrived at the right destination, as this blog post will provide 10 examples of latest technologies (in 2020) to upskill along with the different job positions you can apply for. So, without any further delays let’s jump right into it.

But before that let me ask this, Why Up-skilling in an IT Industry is Imperative?

Well, if you desire to work in an IT sector then you must continuously upskill to keep pace with the new innovations.

Here are the benefits you reap from it:

The only way employees can keep pace with changes in the IT sector is to upskill regularly. This will not only give them job stability but also boost their employability prospects. The ageing workforce must reskill and upskill as technology develops. Soft skills and being up-to-date with newer processes will play a key role in getting employees future ready.

Automation is accountable in the IT sector for rendering jobs redundant as machines replace humans in many jobs. The IT industry, that once drew employees in huge numbers, has suffered from huge-scale layoffs recently, which have made it volatile. Up-skilling is the only way to stay abreast with new methods and remain relevant.

When employees in the IT industry upskill to learn the latest technologies, they become agile. They quickly adapt to the changing needs of the business. They are able to meet market demands and help in driving the change, which not only impacts their industries but overall businesses.

Up-skilling and reskilling open new doors for employees in the IT industry. Many have been able to conceive ideas during these sessions and have successfully been able to convert them into projects. These projects have also played a role in taking the process of transformation in business forward. Trainees receive stimulations during these learning sessions, which can create immense passion within them to pursue these topics for further research.

When you are open to learning new skills, you also open new avenues for yourself in the form of a partnership with like-minded people. These collaborations assist individuals spearhead projects and advance their networking. This also improves their future job prospects.

10 Best Examples of Latest Technologies to Master in 2020

Artificial Intelligence (AI) refers to the simulation of human intelligence in machines that are programmed to think similar to humans and mimic their actions. The term may also be applied to any machine that exhibits traits linked with a human mind like problem-solving and learning. The ideal characteristic of Artificial Intelligence is its capability to rationalize and take actions that have the best chance of accomplishing a certain goal.

AI is utilized in navigation based applications such as voice assistants like Siri, Uber, video streaming services like Netflix, IoT devices and in search engines like Bing and Google. AI assists in automating tasks like traffic, scheduling trains, designing driverless cars and making business predictions!

The Internet of Things, or IoT, refers to the billions of physical devices around the world that are now connected to the internet, all sharing and collecting data. Thanks to the ubiquity of wireless networks and the arrival of super-cheap computer chips, it’s possible to turn anything, from something as small as a pill to something as big as an aeroplane, into an IoT part. Connecting up all these various objects and adding sensors to them adds a level of digital intelligence to devices that would be otherwise dumb, allowing them to communicate real-time data without involving a human being.

The term IoT is mainly utilized for devices that usually wouldn’t be generally expected to possess an internet connection, and that can communicate with the network independently of human action. For this reason, a PC isn’t usually considered an IoT device and neither is a smartphone, even though the latter is crammed with sensors. A fitness band or a smartwatch or other wearable device might be counted as an IoT device. The internet of things technology is making the fabric of the world around us smarter and more responsive, merging the digital and physical universes.

Blockchain, sometimes referred to as Distributed Ledger Technology (DLT), makes the history of any digital asset unalterable and transparent through the cryptographic hashing and use of decentralization. A simple analogy for knowing blockchain technology is a Google Doc. When we create a document and share it with a group of people, the document is distributed rather than copied or transferred.

This creates a decentralized distribution chain that gives all access to the document at the same time. No one is locked out awaiting modifications from another party, while all changes to the doc are being recorded in real-time, making modifications completely transparent. Of course, blockchain is more complicated than a Google Doc, as it is an especially promising and revolutionary technology because it helps reduce risk, stamps out fraud and brings transparency in a scalable way for myriad uses.

Robotic process automation is the utilization of specialized computer programs, called as software robots, to automate and standardize repeatable business processes. Imagine a robot sitting in front of a computer looking at the similar applications and performing the similar keystrokes as a person would. While robotic process automation does not involve any type of physical robots, software robots mimic human activities by interacting with applications in the similar way that a person does.

Working as a virtual business assistant, bots complete tedious tasks, freeing up time for employees to focus on more engaging, revenue-generating tasks. Part of the beauty of robotic process automation technology is that it provides even non-technical employees the tools to configure their own software robots to solve automation challenges.

Edge computing is a networking philosophy focused on bringing computing as close to the data source as possible in order to reduce bandwidth and latency use. In easier terms, edge computing refers to running fewer processes in the cloud and moving those processes to local places, like an IoT device, on a user’s computer, or an edge server. Bringing computation to the network’s edge decreases the amount of long-distance communication that has to happen between a client and server.

Virtual Reality (VR) is the utilization of computer technology to create a simulated environment. VR places the user inside an experience, unlike traditional user interfaces. Rather than viewing a screen in front of them, users are immersed and able to interact with 3D worlds. By simulating as many senses as possible, like hearing, vision, touch, even smell, the computer is transformed into a gatekeeper to this artificial world. The only limits to near-real VR experiences are the cheap computing power and availability of content.

The easiest example of VR is a three dimensional (3D) movie. Utilizing special 3D glasses, one gets the immersive experience of being a part of the movie by on-spot presence. The leaf falling from a tree appears to float right in front of the viewer, or the shot of a speeding car going over a cliff makes the viewer feel the chasm’s depth and may give some viewers the feeling of falling. Essentially, the light and sound effects of a 3D movie make our vision and hearing senses believe that it’s all happening right in front of us, though nothing exists in physical reality.

As companies like Apple, Google, and Oracle continue investing in these applications, it is bound to create a lot of jobs in the future. Intelligent applications developers are sure to bring fat paychecks to their home!

Data Science is a blend of different algorithms, tools, and machine learning principles with the aim to find hidden patterns from the raw data. It is primarily utilized to make decisions and predictions making use of prescriptive analytics (predictive plus decision science), predictive causal analytics, and machine learning. Data science, when applied to various fields can lead to unbelievable new insights.

Also referred to as information security, cybersecurity means the practice of ensuring the confidentiality, integrity, and availability (CIA) of information. Cybersecurity consists of risk management approaches, developing a set of tools, training, technologies, and best practices designed to protect devices, networks, programs, and data from unauthorized access or attacks. The term applies in a variety of contexts, from business to mobile computing, and can be divided into a few common categories such as: Network security, Application security, Operational security, Information security, Disaster recovery and business continuity, and End-user education.

Protection for data and networks, Prevention of unauthorized users, Improved recovery time after a breach, Protection for end-users and Business protection against malware, ransomware, phishing and social engineering are its use cases.

Angular and React are Frameworks based on JavaScript for developing modern web applications. Using React and Angular one can make a highly modular web app. So, you don’t need to go via a lot of modifications in your code foundation for adding a new feature. Angular and React also enables you to create a native mobile application with the same JS, HTML & CSS knowledge.

Its features include: Speed and Performance, Modular, Native App Development and best part it is Open Source.

Job Opportunities in Angular and React:

In today’s competitive and shrinking job market, employers do a lot of research, before reaching out to you or asking for a resume/CV. They conduct screening and research to know what skills, experience, passion and interests you possess. If you really want to pursue your dream career in the IT industry, then up-skilling in these technologies is a must. Hope that you liked our blog post.